Today, Wednesday, witnessed strong matches in the Egyptian league Al-Mumtaz, witnessed Al-Ahly stumble for the third time, and Future won and snatched the runner-up from Zamalek, while the Al-Haras and Al-Tala’a match ended in a positive draw, and the Enppi and Al-Dakhliya match ended in a negative draw.


The matches of this round will continue over the next two days, as tomorrow Al-Masry will play against Aswan, while Zamalek will meet its Ismaili counterpart, and the day after tomorrow, Smouha will face its rival, Ghazl Al-Mahalla, and Al-Ahly Bank will clash with the Arab Contractors.


And the club fell The Egyptian Al-Ahly Al-Hilal’s competitor in the Champions League, in a positive tie trap (1-1) against its rival, Ceramica Cleopatra, this evening, Wednesday, in a match that brought them together at Cairo Stadium, within the tenth round of the Egyptian League competitions.


With this result, Al-Ahly maintains the league lead with 24 points, while Ceramica reached 12 points in eighth place in the league table, so Al-Ahly continues to bleed points after a tie for the second match in a row and the third since the start of the current season.


In the second match, the Future team achieved a victory over its counterpart Pharco, 3/2, in the match that brought the two teams together a short while ago at Alexandria Stadium in the tenth round of the Egyptian Premier League, to snatch second place from Zamalek, after its score reached 22 points.


Meanwhile, Haras El Hodood tied with its counterpart, Talaea El Jaish, with two goals each, in the match that brought them together, at the Sports Apparatus Stadium, in the tenth round of the Premier League competition.


The match between Enppi and Al-Dakhliya ended in a goalless draw, in the meeting that brought them together at Petrosport Stadium, in the tenth round of the Premier League championship. 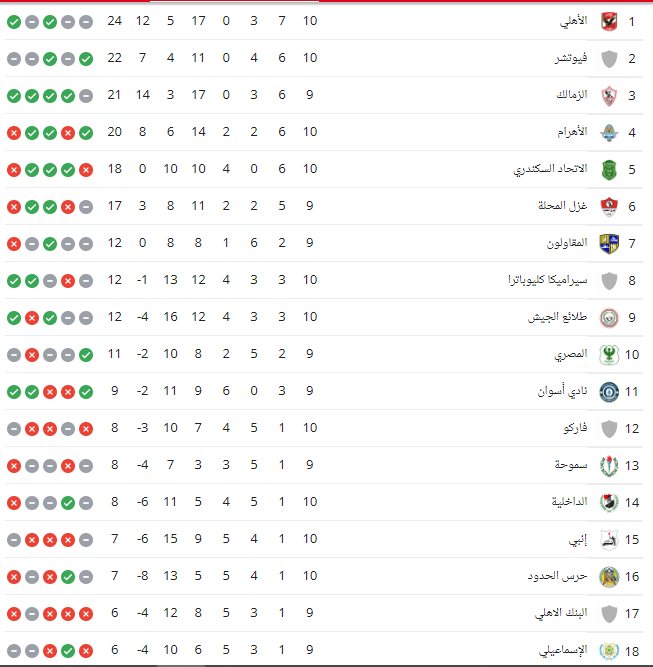