It was discovered by the European Space Agency’s Mars Express spacecraft, ESA Mars They produce surprisingly Earth-like cloud patterns, especially those found in our planet’s tropics, according to a new study that delves deeper into dust storms that have occurred near Mars’ north pole.

However, according to Phys, Earth and Mars have very different atmospheres: Mars’ dry and cold atmosphere is made almost entirely of carbon dioxide, while Earth’s atmosphere is rich in nitrogen and oxygen. 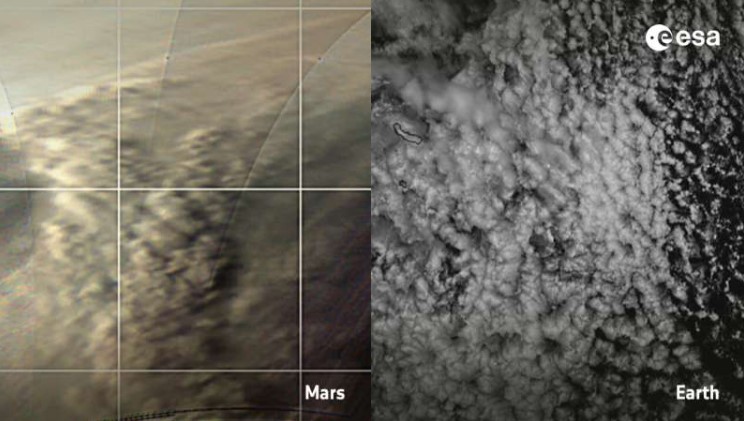 The density of its atmosphere is less than one fiftieth of that of the Earth’s, which corresponds to the density found at an altitude of about 35 km above the Earth’s surface.

Although they differ greatly, their cloud patterns have been found to resemble those of Earth, indicating similar formation processes.

The storms were observed during the Arctic spring, when local storms usually form around the ice sheet.

Cameras aboard the Mars Express, Visual Monitoring Camera (VMC), and High-Resolution Stereo Camera (HRSC), along with the MARCI camera aboard NASA’s Mars Reconnaissance Orbiter, have imaged the storms from orbit.

The VMC image sequence shows that the storms appear to grow and fade in cycles over days, showing common features and shapes.

The spirals are clearly visible in wider views of the HRSC images. The spirals have a length of 1,000 to 2,000 km and their origin is the same as that of the extratropical cyclones observed in the middle and polar latitudes of the Earth.

They showed that Martian dust storms consist of small, regularly spaced cloud cells, arranged like grains or pebbles, and that this texture is also seen in clouds in Earth’s atmosphere.